The Newest Studio Ghibli Movie "The Tale of Princess Kaguya"

The Newest Studio Ghibli Movie "The Tale of Princess Kaguya"

The new film from Studio Ghibli "The Tale of Princess Kaguya" (Kaguya-hime no Monogatari) premiered in Japan on Saturday November 23rd, 2013! 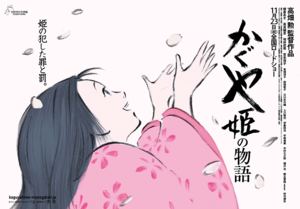 Ghibli films directed by Hayao Miyazaki are perhaps the most famous abroad, but this film is directed by co-founder of Studio Ghibli, Isao Takahata. Takahata directed and wrote "The Grave of the Fireflies" and "Pom Poko," and was involved in other famous Ghibli films such as "Castle in the Sky" (producer) and "Kiki's Delivery Service" (music direction).

The new Ghibli film of 2013 is based on a Japanese folktale called “The Tale of the Bamboo Cutter” (Taketori Monogatari). This folktale is known throughout all of Japan and the character Princess Kaguya is familiar to young and old alike.

While the plot of the folktale is well known, how the story would be adapted for the film has been kept quiet!

With the release of this 3 minute trailer earlier this month, though, it is clear that one of the biggest attractions to this movie is the beautiful art style and animation!

The movie does not yet have any overseas release dates yet, but hopefully there are plans in the works!

The tale of Princess Kaguya takes place during the Heian Period, and as we can see the in the trailer, Japan’s royal costume “junihitoe” makes some appearances! The art style and the movement of the robes beautifully illustrates the elegance of the many layers of junihitoe.

Here at Miyabi Yuki, we hope that this new film will encourage interest in Japanese traditional clothing and the culture of the Heian period!

In order to spread knowledge about Japan's royal costume, we started offering junihitoe and "Princess Kaguya" experiences here in Kyoto several years ago. Kimono and junihitoe (as well as other costumes of the Heian period) are important parts of Japanese culture that we hope people from all around the world will have the chance to experience!